Sonja and Agnes are members of group IG 14. Jahrhundert, which specialises in the depiction of the everyday life of Viennese craftsmen and citizens around the middle of the 14th century. Contemporary cuisine is a main pillar of the reconstruction and mediation work on so-called “Belebungen” in open-air museums. In addition to cooking based on original recipes from historical cookbooks, the work of kitchen manager Sonja and her team also focuses on basic techniques of historical cooking such as stockpiling, preserving and preparing food. They publish the results on their  website or via social media.

At the beginning of our participation – which was only possible due to the forced virtual format – the question was: Which recipe from which cookbook? At least that would be the classic approach. But no, we do it differently… We start – as with so many reconstruction attempts by IG14 – with the find. Our cooking experiment today is a fruit purée.

The find: During the excavations at Marienhof in Munich in 2011/2012, a well-preserved ceramic pot was found, which still contained a large amount of burnt fruit pulp. The pot was dated to the early 14th century on the basis of its shape, the clay mixture and a C14 analysis of the organic remains it contained. So exactly our dating.

A palaeobotanical analysis of the burnt remains revealed a composition of cherries, plums, raspberries or blackberries, possibly plums, apples and sloes. Traces of honey were also found. A mixture that we could very well imagine as a fruit puree. However: the ingredients as a whole are not available fresh at the same time. Since sloes can be dried well and should in any case only be harvested after the first frost, we assume that the fruit puree was probably made in late summer. We had no dried, but at least frozen sloes at our disposal; cherries were only available as compote and plums has not been available, but we used some dried plums. All other ingredients were processed fresh.

Unfortunately, we can’t give a concrete recipe here. We assume that simply the available and possibly perishable fruits were processed. Accordingly, the proportions by weight will have been very variable, depending on availability.

However, we can give a rough indication of our “reconstruction” and interpretation: 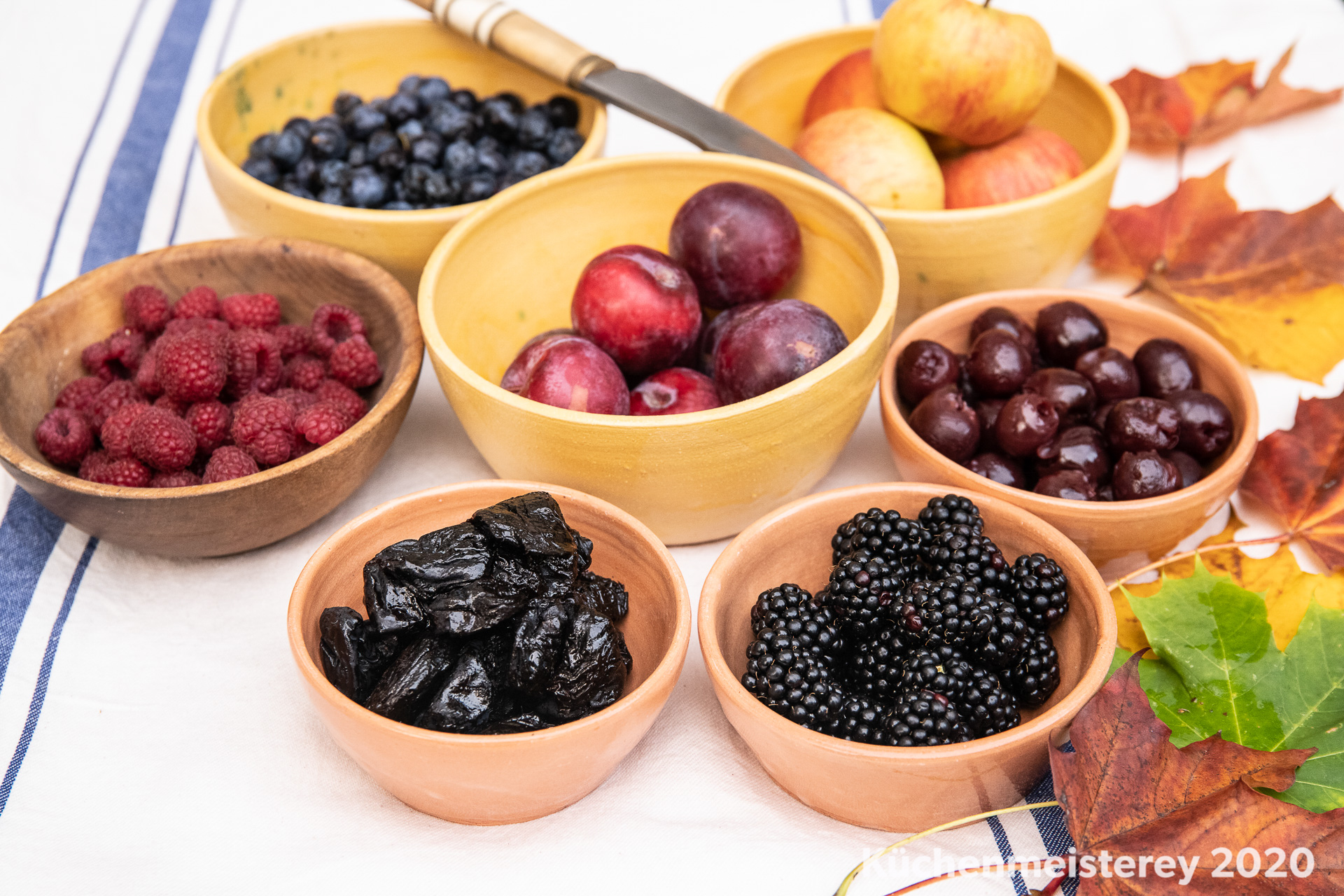 We filled the pot, which is about 18.5 cm high and holds 2 litres (just as the find) with fruit and then poured water over it. It took about 1.5 hours to boil it down in the fire and the pot was still about 2/3 full.

And now? We have almost achieved the match with the find. Since our pot is worth a lot to us, we did not let the purée burn. Instead, we asked ourselves what would have happened to the mush if it had not been burnt and disposed of in the latrine.

We were somewhat surprised that not only berry seeds were found, but also apple, cherry and plum seeds. 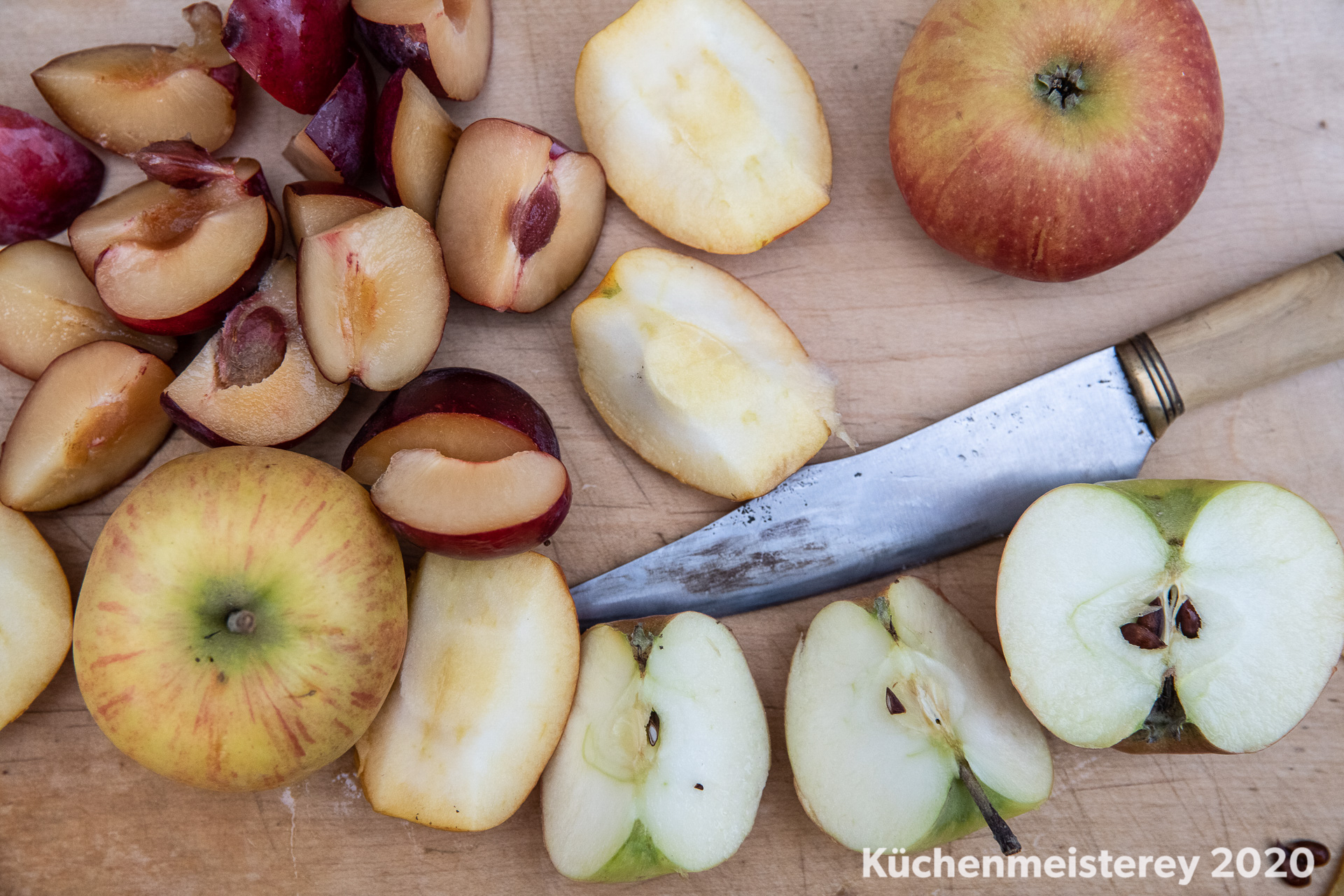 Especially with apples and plums, pitting is not a big deal, and with cherries as well. So we looked around in the historical cookery books and found the following recipes, which are in the same direction as we found them:

Here the cherries are cooked, but can also be replaced by sloes or “Kriechen”. It is also suggesteed to use bread to thicken the purée. The mush is passed through a sieve as well and sprinkled with spices before serving.

Again, the cooked fruit is pressed through a cloth and then bound with egg yolk and breadcrumbs.

Recipe no. 78 – A compote of sour cherries

This recipe also suggest to press the cooked fruits through a cloth and then to store it in a pot with honey and to add galangal.

It is interesting to note that the Würzburg cookbook contains a follow-up recipe to the stewed sour cherries, which describes how they are processed into “Latwerge”.

As the purée in the find is already burnt in the first cooking process, we have acted now by being inspired by the above mentioned recipes.

We then whipped the fruit mass through a cloth to obtain a nice creamy mass.

As a reward, we then enjoyed a portion.

Finally, we boiled down the rest – as in recipe no. 78 or the later follow-up recipe – in a modern cooking pot with another 100 grams of honey and galangal, spread the mixture on top and let it dry. After a few days, the mixture became solid “Latwerge” or fruit leather. 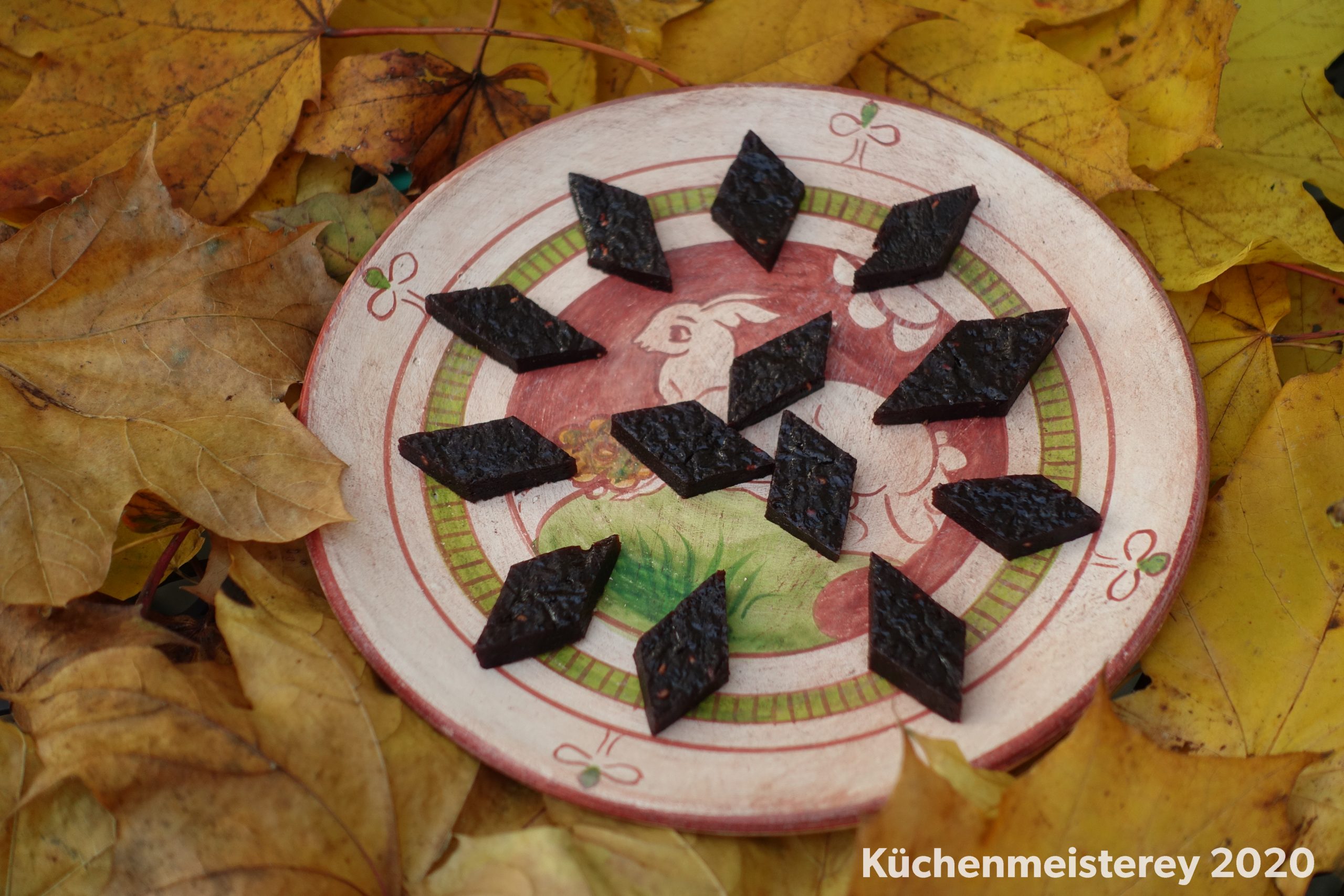 Since we did not cover the pot in the second half of the cooking process, the mush also took on a distinctive smoky note from the fire.